As the ***le suggests. I bought some euro r CL7 hid headlights off eBay, my 2.4 cl9 does not have hids just thre standard headlights. I was hoping the CL7 lights would be plug and play but my car does not have a plug that fits the ballast. Obvously all the other plugs fit everywhere else. So I’m ***uming from factory there are different looms?

So on the standard headlight below the side marker light on the back, there’s a circular plastic twist plug, when you remove it it has 2 wires attached to it, that go into the headlight. On the euro r hid lights this is not there and the hole is blanked. So can I ***ume these 2 wires would be the power and earth for the ballast in hid equipped cars? Has anyone had experience fitting factory hid lights to a car with non hids? Or am I missing something? Any help much appreciated

I considered going down the very same route you've chosen, but in the end I decided it was more cost effective to retrofit a morimoto h1 kit and then later upgrade to mini d2s with bixenon.
technically though, you only need to convert the plug to one that fits the ballast, taking power and ground from where the housing gets its power to internal h1 low beam, if you're ghetto enough you could even do it with spade connectors (though I don't recommend it)

exploded view because why not 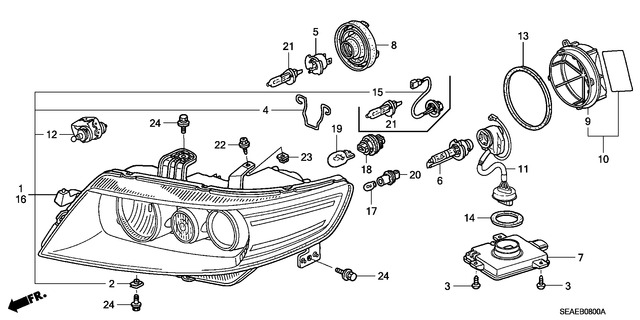 Don't factory HIDs have auto levelling? Don't know if the servo is the same or if it can be used with the manual control.
Formerly pre-facelift i-CTDi EX tourer then Facelift i-DTEC ES GT tourer.

Yep you’ll have no headlight levelling with the retro fit. Simplest is to stick a HID kit in.

hella does sell a (few) aftermarket self levelling kits, but at £700+ I don't think they're worth it. additionaly, their catalog is so vast, the kits may as well be urban legends with how difficult they are to find and then source a dealer that understands what it is you want.
with the clean cutoff of the projector, my logic is that if I were blinding other drivers with hids because of maladjustment of the leveling, I would be blinding with halogen anyway
You must log in or register to reply here.
Share:
to Facebook Twitter WhatsApp Email Link
Menu
Log in
Register
Top