Hi! Firstly, thank you all so much for the wealth of information you've accumulated on this forum. You've been a gold mine for many of us lurkers!

I've got a 2006 Accord 2.2 I-CTDI Ex which has, with a previous owner, had the fuel rail system replaced with no further faults until now.

I've experienced a non-start three months ago (cranking at normal speed, good battery, no previous fault). It was a hot day and priming the fuel bulb seemed to make it go eventually. Management light cleared after the 3 subsequent starts. No re-occurrence.

Moving forward to a couple of weeks ago. I ran the tank very low and found an unusual hesitation after about 5-8 minutes of driving. This has occurred every drive, sometimes worse than others. It would hesitate then drive absolutely fine. Sometimes the management light would illuminate then clear after the three starts.

Thinking it could be contamination and I knew it was time to change the filter anyway, I did so four days ago. The genuine Honda filter seemed to prime and start without fault. Drove it and the hesitation remained, again after about 5 mins. Thought it could be an air pocket.

Driving in this morning I had a tailgater so opted to pull over into a lay-by to let the tool pass. Engine cut-out and wouldn’t restart. Tried to prime using the fuel bulb, went hard then pressure quickly dissipated. Still failed to start. Twice it coughed into life and died immediately. Left for 10 mins and it started fine. Drove to work with using a lower gear and higher RPM than normal (to stop the RPM from getting too low) and no fault apparent (other than the management light). It appeared to idle as normal so turned it off and left it. I just tried starting and it lit up without any problems.

My way forward as I see it:

1) Clear codes and re-check.
2) Re-bleed the filter.
3) Do a leak back check on injectors and pressure valve.
4) EGR valve tinkering.

Sounds like a fuel pressure issue, most likely contaminated fuel filter. Change filter, Clear codes and see how you get on.

Thanks for the quick reply. I only changed it four days ago.

if there are no leaks on the filter or housing, could it be the sock-like pickup filter/strainer in the tank getting clogged up by running the tank low?
if it is, it will deny proper flow to filter and consequently pump and rail and cause symptoms much like a clogged fuel filter
if it was a pipe leak you should see it, and leaving it to sit for a period of time should cause fuel to creep back, introducing air into the system - only the filter supply matters.

the crankshaft related codes are more often than not simply related to a fail to start scenario/it takes too long to start, the avensis/d4d for instance is notorious for it but it has no consequences and will self-clear eml

If the sock was contaminated, would the fault be more consistent throughout the range? It's a single hesitation at the 5-8 minute mark.

I would think it would be seen mostly when giving it the beans, so it doesn't quite fit no

was the fuel rail new or used? I ask because starting issues have been attributed to sticking/faulty relief valves in the rail

The fuel rail was used, if I remember correctly. It was some time ago now. I'm thinking about replacing the relief valve as this appears to be commonly suggested. The Bosch ones seem to be around the £120-140 mark whilst patent parts around the £30 mark. The patent parts appeal (price mostly) but are listed as Accord VIII. Are they the same item?

the bosch number overlaps across i-ctdi and i-dtec engines so I would ***ume so, but it's difficult to discern as the valve was sold as part of the rail as far as I can tell from diagrams on lings 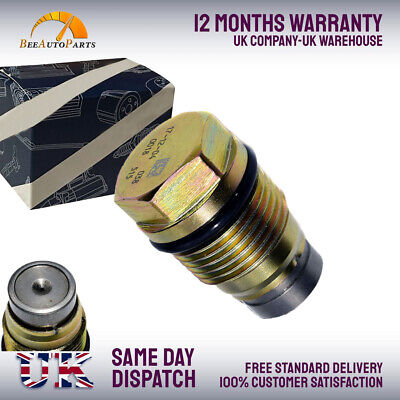 Just making sure, again it says Accord 2008. Would this be compatible?

*Edit - the item says 2004 onwards and the compatibility guide says 2008. I'll email the seller and get back.

This is what is currently fitted.

for £30 I would take my chances, it's that or another used rail unless you can pinpoint a culprit elsewhere :/

As you say, £30 is definitely worth a punt. I'll come back with any progress!

Just read your thread properly. It does sound like either a faulty FPR valve or a bad injector, so do the FPR valve and move on from there.

Have you checked what comes out of the pipes up to the new filter ?

You could have rotting fuel in the tank that will compromise all you replace until it is cleared out.

A strange odour might be a clue at the pump.

Channel Hopper said:
Have you checked what comes out of the pipes up to the new filter ?

You could have rotting fuel in the tank that will compromise all you replace until it is cleared out.

The fuel appeared clean, clear and no unexpected odours when I was bleeding prior to start. If the FPV doesn't clear it I'll make that my next port of call.

F6HAD said:
Just read your thread properly. It does sound like either a faulty FPR valve or a bad injector, so do the FPR valve and move on from there.
Click to expand...

Thank you all for your helpful replies.

I've got the replacement item. 2 problems!

belt off and let the compressor flop on the side, no biggie

it may not be the end of the world! experienced the same thing with a rail pressure sensor on a citroen, 24 stock 27 replacement /shrug

Don’t disconnect the aircon pipes though or you’ll need a re-gas.

I was wrong, it's the power steering pump! Having real issues trying to get the aux belt off. Will come back when I've made some progress.

Doh we should’ve spotted that, yes it’s the PS pump not the aircon compressor at the top of the block.

I see your Doh and match it.

Belt loosened, PS pump unshipped...relief valve rounded off! I've got a tool at work that might get it off, not holding my breath though. Might be in the market for a replacement fuel rail now. Double Doh!

We've got Snap On nut removers at work, I'll give them a go. I don't have an impact gun, possibly a neighbour might.
C

A good imperial six sided ring spanner should fit over the top with a gentle thump.

Finally out, she put up a fight! No match for a Snap On stud extractor!

If the Snap-On is like the Amartisan you would need to remove more than the steering pump.

Looks very similar. The valve is out and the replacement is in. Just need to re-fit the fuel rail when I get home tonight. Refit the belt, bleed the pipework and hopefully a test drive!